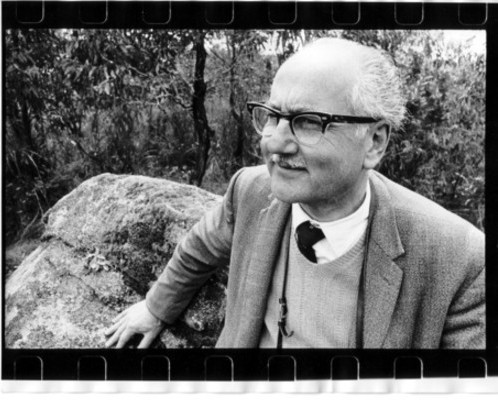 ALDO MASSOLA was a noted anthropologist and acknowledged authority on the life and culture of the Australian Aborigines as they were.

He was born Enzo Aldo Massola on September 4, 1910 in Rome, Italy. However, most of his childhood was spent in Turin, the home of his family for generations, and France. His father, Carlo, a well-known racing driver, was a test driver for the Fiat Motor Company and in 1923 was sent to Australia under contract to the company. When his contract expired he decided to remain and was naturalised so Aldo completed his education in Melbourne. Perhaps inevitably, as a youth he was a garage worker but by the time he reached the age of 21 he was describing himself as a "field naturalist".

In 1932 Aldo married Australian-born Marianna (Mary) Zaccari and the couple had one daughter. While he pursued his interest in anthropology and prehistory, Aldo supported his young family with a parallel career in restaurant and hotel management (the fact that his new father-in-law was a fruiterer and something of a gourmet possibly providing an entrée to the culinary world) - first learning the art of food and wine while working as a waiter; then, most visibly, as the popular host and raconteur at Mario's, a Melbourne landmark of the time; and later, with Mary, founding the Croydon Tea Rooms - although a variety of retail ventures over the years met with less success.

He also found time to develop a keen interest in tropical fish; elected at one stage as Honorary Secretary of the Aquarium Society of Victoria and even winning a number of breeding awards in the thirties as well as writing his first published articles on the subject. In 1934 Aldo and colleague Marcus Mogg undertook what was then an arduous sea voyage to Malaya and Singapore and returned with a cargo of exotic fish and reptiles - some purchased, some they caught themselves - bound for the Melbourne aquarium and for private fanciers.

His own ethnicity became an issue when World War II, with Mussolini's Italy an enemy nation, brought the threat of internment but he was instead "grabbed for the Manpower" as Mary subsequently put it, referring to the Manpower Directorate empowered by the Australian Government in 1942 to compulsorily allocate workers as they saw fit to best support the war effort. In an ironic echo of his father's times, this would find Aldo employing his organisational skills streamlining the inventory system of an auto parts factory.

Changing gears so to speak, in 1949 he was a founding member of the Numismatic Association of Victoria.

A turning point came when at the University of Melbourne he met Dr. Leonhard Adam, a world-renowned authority on primitive art and exponent of the diffusionist school of anthropology. Dr. Adam's mentorship set Aldo on a path which culminated with his appointment in 1954 as Curator of Anthropology at the National Museum of Victoria.

Specialising from the beginning in South-Eastern Australia, a largely overlooked region whose history he saw threatened by time and urban expansion, his work in this area made him one of Australia's best-known writers and researchers on this subject. He contributed almost two hundred papers covering every phase of Aboriginal life, as well as Oceanian and Asiatic art and other subjects, to leading anthropological and other scientific journals in Australia, Great Britain and the USA. He was elected a Fellow of the Royal Anthropological Institute of Great Britain and Ireland in 1950 and Fellow of the Royal Asiatic Society in 1956; was President of the Anthropological Society of Victoria 1959-61 and Inaugural Panel Member of the Australian Institute of Aboriginal Studies 1962-65.

In 1963 he was accused of stealing rare coins. He fought the charge in court but despite this was convicted and dismissed from the museum, ultimately serving ten months of a two year prison sentence. Even then, in what he called "the most difficult period of my life", he kept working; making a start on what was to become Bunjil's Cave, his first book. He eventually published eight books on the Aborigines (including one posthumously) while a ninth volume, his last completed work, was made available only in 2010 just in time for his centenary. An anthology of his articles on an array of topics is also available, as is Italian Interlude - part history and part memoir of a 1970 trip which marked Aldo's first return (and Mary's first visit) to the land of his birth since leaving almost half a century earlier.

He devoted his final years to writing and teaching and of course continuing his research and field work on trips known to his family (now including two grandsons) as "excursions", much of which involved lengthy periods under canvas in isolated areas of Victoria and New South Wales. Somewhere along the way he taught himself photography in order to document the sites he feared would otherwise soon be lost forever. In 1973 he compiled for the budding Aboriginal land rights movement a map defining the areas of traditional tribal ownership - a precursor in a sense to the Native Title legislation of the nineties. Sadly, plans to fulfil a long-cherished ambition of visiting India were dashed in 1974 when he suddenly took ill.

Aldo Massola died of cancer on July 6, 1975. Unknown to him he had been nominated for a British Empire Medal for services to the community but unfortunately passed away before the honour could be bestowed.

The Aldo Massola Collection of Historical Photographs is housed at the now renamed Australian Institute of Aboriginal and Torres Strait Islander Studies (AIATSIS) in Canberra, along with an extensive selection of his published writings. Many of his articles can also be found online; direct links to these (where known) are provided on the papers page.

The Australian Dictionary of Biography entry on Aldo Massola can be found here. Another view, originally published in the Melbourne Herald newspaper and including recollections from Mary Massola, has been reproduced here. The Victorian Naturalist, journal of the Field Naturalists Club of Victoria, to which Aldo had contributed so many articles over a 20 year period, published its own tribute in its May-June 1976 issue.